As one who spent over 30 years in a career in science, I think I have some standing to comment on the notion that climate change is some sort of collaborative hoax cooked up by the super-rich and their political hacks, who have persuaded all the climate scientists to accept it – whether out of stupidity, the lure of some mysterious promise of money, or the cowardice that comes from not wanting to been seen as disagreeing with everybody else.

Uninformed voices will tell us that it can all be explained away because “the Earth’s climate is cyclical” (which it is, and we know that because of research by the very scientists they now want to tell us are not to be believed), “last winter we got more snow than the winter before” (climate and weather are different things; anecdotal weather incidents are not proof of anything about sustained climate activity), and “35 years ago the same people told us we were on the verge of a new Ice Age” (no, they didn’t).

The fact of climate change and the existential threat it poses is not refuted by the agreement of all the scientists, but rather confirmed by it.

As any professional scientific researcher will tell you, there is nothing scientists like better than a good fight. There is nothing scientists like better than working to disprove the majority opinion. Like everyone else, scientists have egos and want to make a significant mark and leave a legacy. The way to do that is to show that the prevailing opinion and the proponents of it are wrong. Because when you take down The Man, you become The Man.

The near-unanimity of climate scientists, geophysicists, and the rest of the scientific community about climate change caused by anthropogenic global warming is not an accident, a hoax, or an international plot. It is evidence that there is a world-threatening crisis that must be addressed.

Yet there is – almost entirely in the United States – a collection of people who refuse to accept the reality of climate change or the need to do anything about it. In their minds (and I count several friends among those who adhere to this notion), there is no human-caused global warming or climate change. They tell us that the whole thing is made up by a gang of international “elites” for the sole purpose of destroying freedom and arrogating total world domination to themselves. This shadowy group that they claim is behind the climate-change “hoax” is usually headed by international financiers such as George Soros (or, for some, the ubiquitous Rothschilds).

This gang of “elites” they would have us believe has corrupted science by buying off all the climatologists, earth scientists, geophysicists, and all but a tiny handful of the rest of the scientific community. These scientists are held under control because the “elites” control the purse-strings and thus all the scientists in the world must do as they are told or they will get no more funding for research. Apparently, the “elites” have also corrupted all the governments in the developed world – except those in the United States – to make them join in the worldwide climate-change hoax. Either that or all the people in government (except in the United States) are so stupid and ignorant that they believe anything scientists tell them, perhaps the next thing being that the Moon is filled with Pepsi-Cola.

The deniers’ wails of “fake news” and “fraudulent science” increased to a shriek over the last several days because millions around the world demonstrated and demanded international action to mitigate climate change, and a group of committed and articulate young people, led by Greta Thunberg, a 16-year-old Swedish activist, addressed and challenged the members of the United Nations to get up and act now. 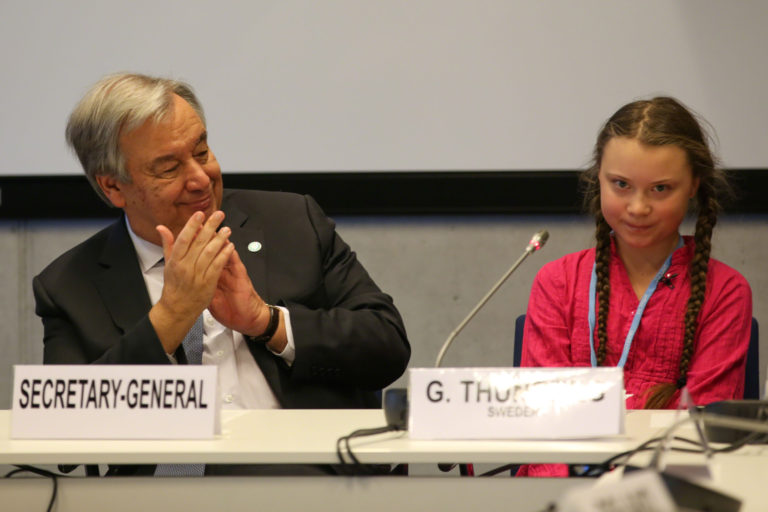 If any evidence is needed that it is the deniers of climate-change are intellectually bankrupt, it is that their response to Ms. Thunberg’s concerns has been an unrelenting outpouring of insults, personal attacks, and ad hominem bloviating. She is being called a demented, abused, mentally ill child (here is an example). Insults and ad hominem attacks are the default response of opponents who know they cannot muster a real argument. Here is one opinion about why Thunberg – among the large cohort of climate-change activists – inspires such vituperation.

Regular readers of my blog will know the name of my friend Xiuhtezcatl Martinez, long-time environmental activist, musician, speaker, writer, and performer. He recently was featured in a commentary promulgated by Senator and presidential candidate Bernie Sanders, which you can view here.  He also appeared last week on the PBS program Amanpour and Company. Xiuhtezcatl has his own dedicated menu on this site, and I urge you to read the posts listed there, and to find out about his latest venture here.

It is a tall task to rise against the entrenched interests of money – particularly that of the fossil fuel industry and its lackeys – in order to save the future of the Earth. In the USA and around the world, that task is being shouldered by a generation of young activists who will not be shouted down, out-maneuvered, or sent to their rooms without supper. They have a big job, and they don’t have very much time. But I believe in them, and you should, too. It is a movement born of necessity, and effected with incredible dedication, hard work, and love. The least we can do is to let them know we are on their side.