Most people probably don’t know who Elbridge Gerry was, but he was a significant figure in the forming of the United States.  He signed both the Declaration of Independence and the Articles of Confederation, and was a delegate to the Constitutional Convention.  He did not sign the Constitution because of political misgivings about it, but after it was adopted he became a member of Congress, where he helped write and pass the Bill of Rights.  Later he was James Madison’s Vice President, but died less than halfway through his term.

Gerry may be a little-known figure today, but his name survives in the term “gerrymander.”  Although the word has changed in pronunciation from the hard “G” of Gerry’s name (pronounced like “Gary”), to the soft “J” sound at the beginning, it  is indeed an eponym.

The meaning of “gerrymander” has not changed since it was first coined in 1812.  Gerry was then governor of Massachusetts, and signed a law that created new voting districts after the 1810 census.  His party, the Democratic-Republicans, controlled both houses of the State legislature, and they drew the boundaries of State and Federal legislative districts to favor themselves. The results included some tortuously-designed districts, including one that was satirized in the Boston Gazette with a cartoon depicting it in the shape of a fanciful monster. Comparing it with a salamander, the Gazette dubbed the creation a “Gerry-mander.” 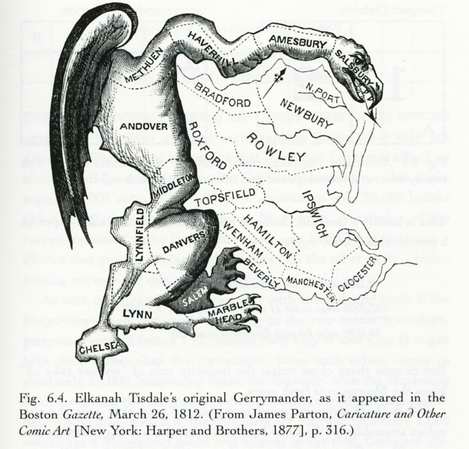 The sobriquet has been common ever since, and so has the practice of the victorious party in State elections drawing district boundaries to suit themselves.  It got seriously out of hand until two Supreme Court decisions, Baker v. Carr (1962) and Reynolds v. Sims (1964). These cases – which Chief Justice Earl Warren called the most important of his tenure – accomplished three things.  First and foremost, they established that the Federal courts have the authority to intervene in issues of the apportionment of representatives.  In addition, they established the principle of “one person, one vote,” meaning that all districts must be roughly equal in population.  Finally, they provided that State legislatures, as well as Congress, are subject to the same rules of apportionment of representation.

Later legislation and court decisions established that the powers of the Voting Rights Act of 1965 could be used to prohibit the exclusion of minority representatives by the dilution of racial populations into several majority-dominated districts, and that – although districts were directed to be “compact and contiguous” – racial makeup could be used to draw unusual boundaries to ensure minority communities could be represented adequately.

The United States Supreme Court is set to rule on a new challenge to gerrymandering. Last week, the Court agreed to take up the case of Gill v. Whitford.  The issue of race is absent in this matter; it is strictly about partisan political advantage being used to discriminate against voters of the other party.  The case arises from Wisconsin, where the plaintiffs contend that the Republican-dominated State legislature has drawn the legislative district boundaries to give itself a total number of seats much higher than the proportion of the votes the party’s candidates receive Statewide.  In the first election after the redistricting, Republicans got 48.6 percent of the votes but 60.6 percent of the State Assembly seats.

A Federal District Court ruled 2 to 1 in favor of the plaintiffs, and a divided SCOTUS will take up the issue during its next term, which begins in October.  The decision will be an arduous one, much like Baker v. Carr, which was so agonizing that it is credited with breaking the health of Justice Whittaker such that he had to retire that year. [Update: in June 2018, SCOTUS declined to rule on Gill, and returned it to the lower court to determine if the plaintiffs have standing to bring suit.]

Until Baker, the Supreme Court had generally held itself out of political matters, and so far has not found that “the winner gets to make the rules for the next game” is a maxim odious to American ideals of fairness.  The closest anyone came to that was Justice Ginsburg in the 2015 case of Arizona State Legislature v. Arizona Independent Redistricting Commission. Ginsburg wrote the majority opinion in the 5-4 decision, and included commentary on the practice of political gerrymandering, plainly stating, “partisan gerrymanders are incompatible with democratic principles.” Now, in Gill, the plaintiffs are bringing action on Constitutional grounds – specifically that excessive gerrymandering deprives individuals of First and Fourteenth Amendments rights to free association and equal protection under the law.

It is, of course, not only Republicans who engage in or benefit from gerrymandering.  A case against the Democratic Party of the highly-gerrymandered State of Maryland is also working its way through the courts.  Republicans, however, have seen the most benefit because they control the most State legislatures, which usually have the final say in district-drawing.

Some States do it a bit differently.  My State, Ohio, has an “Apportionment Board” made up of one Republican and one Democrat from the legislature, along with the Governor, State Auditor, and Secretary of State. It is obvious that the party winning two of the three Statewide offices gets to control reapportionment for Ohio’s State legislature, and that State legislature has the final say in drawing U. S. Congressional districts.  As a result, Republicans regularly get about 52 percent of Congressional votes Statewide, but 75 percent of the seats. A new law will take effect after the 2020 census and is supposed to give the minority party some say in redistricting.  But it is set up so that if an agreement between the major parties cannot be reached the decision will revert to the legislature. In Pennsylvania, Democrats got more votes for members of Congress in 2016, but Republicans won 13 of 18 seats.  North Carolina is similar.  For the Democrats, Maryland’s apportionment has turned a two-to-one majority in votes into a hold on seven of eight Congressional seats. You can see more here.

The difficult question in gerrymandering is, “When does enough become too much?”  As Justice Potter Stewart famously remarked about pornography, it’s a tough thing to define but “I know it when I see it.” That is not going to be good enough to pass a SCOTUS test; a working and workable definition is required.

There are some tests in existence which claim to be able to detect undue gerrymandering, but there are flaws in all of them.  In addition to passing tests of size and shape, they must be able to protect the interests of racial minorities.  Adding political fairness poses an even more difficult challenge, but the simplest algorithms for compactness and contiguity must be tweaked and massaged to consider concerns of political and physical geography.

Consider the many lists of “most gerrymandered districts in the nation.”  Some are obvious, such as the Seventh District of Pennsylvania, the shape of which has given it the nickname “Goofy Kicking Donald Duck,” or the “Praying Mantis” Third District of Maryland.

However, some of these are misleading.  Maryland’s elongated and narrow-waisted Sixth District is often cited as an egregious gerrymander because it fails tests of compactness. But its shape is not the result of purposeful gerrymandering – it is simply the result of western Maryland’s unusual shape, as it follows the State’s boundaries with Pennsylvania and West Virginia.  On the other hand, there is the Ohio Ninth, which snakes along from a Democratic stronghold in Toledo 100 miles eastward to a Democratic stronghold in Cleveland through a skinny strip of land rarely more than about five miles wide, sometimes maintaining continuity by just a bridge.  Yet it is rarely mentioned as a heavily gerrymandered district because it is officially much wider.  It extends many miles across Lake Erie to the Canadian border, which gives it the shape of a bent rectangle.  No voters live in the lake, but it’s still officially counted in the area measurement of the district.

The Ohio Ninth is an excellent example of what gerrymandering is all about.  It is not designed to create a whole bunch of safe seats for your party.  It is designed to create a small number of extremely safe seats for the other party. All those Democrats in Toledo are linked with all those Democrats in Cleveland for 80 percent of the votes so that they keep Democratic voters out of several adjacent districts, which the Republicans can then win by narrower margins because so many Democrats have been safely squirreled away in their own district. In fact, the current Ninth was created by putting two heavily Democratic districts together and forcing two Democratic Members of Congress to run against each other in the primary election. Since the most Democratic districts are dense urban areas, it is easy to manipulate the system to create one or two 90 percent Democratic districts surrounded by four or five 60 percent Republican ones.

Drawing voting districts to suit one party’s interests is not what the American experiment was intended to produce. It’s a time-honored tradition, though, and an effective and self-perpetuating one that is not going to go away whatever rules are put in place. Irrespective of what the Supreme Court decides in Gill v. Whitford, gerrymandering and the resulting unfair and undemocratic representation in Congress and in State legislatures will remain until people remove them.  So far, the most effective way that has been tried in this country is that of California (and a similar one in Arizona). An independent board free of politicians, lobbyists, and big campaign donors draws the district lines.  In the 2016 election, the makeup of California’s legislative seats almost exactly matched the proportion of votes each party received.  A good result, and one that could – and should – be sought in every State.

[Update: A post expanding on this issue is available here.]

One thought on “GERRYMANDERING”