In an earlier post, I explored the history and significance of gerrymandering, the practice of drawing the boundaries of legislative districts to give a political party a number of representatives disproportional to its overall votes. A year ago I posted about ALEC, the American Legislative Exchange Council, and its nationwide effort to control the makeup, as well as the agenda, of State legislatures.  State legislatures are given little notice by a large majority of Americans, but they are where the real damage to democracy can be done.

On the first Monday in October, the United States Supreme Court begins hearing arguments on the cases it has decided to consider in its new term. This year, that will be October 2, 2017.  The following day, the court will begin its review of Gill v. Whitford, which challenges the Wisconsin State legislative redistricting of 2011. This past January, a three-judge panel of the U.S. District Court of Western Wisconsin unanimously held that the 2011 redistricting unconstitutionally deprives some citizens of Constitutional rights under Article Four and the Fourteenth Amendment.

It is imperative that SCOTUS make a firm decision on this issue in this term, because the 2020 census will provoke the redistricting process the following year. If the court decides in the plaintiffs’ favor, nearly every State will have to have new and fair processes in place by then to ensure compliant elections in 2022.  It should be simple to acknowledge that the boundaries of elective-office districts should not be drawn by the candidates themselves, but that’s usually how it’s done. The Court’s decision in Gill will determine whether the practice of office-holders choosing their voters – instead of the other way around – will continue.

How did this all come about?  State legislatures have been drawing disproportionate districts since the beginning of district representation and Baker v. Carr (1962) was only a speed bump in the rush to one-party control.

Things got really down-and-dirty in 2008, when Chris Jankowski, a Republican operative concerned that demographics might make his party a permanent minority, brought to contributors, through the Republican State Leadership Committee, something he called “Project REDMAP”  (REDistricting MAjority Project).  Project REDMAP makes no effort to disguise its purpose, that of gerrymandering legislative districts to give disproportionate control to Republicans. Its website boasts that “Republicans have an opportunity to create 20 – 25 new Republican Congressional Districts through the redistricting process over the next five election cycles, solidifying a Republican House majority.” (A full examination of how this came about can be found in David Daley’s 2016 book, Ratf**ked: The True Story Behind the Secret Plan to Steal America’s Democracy.)

REDMAP’s website goes on to proudly report the results of its efforts to thwart the will of the people in the election process. In the 2012 election, they brag, “voters pulled the lever for Republicans only 49 percent of the time in congressional races,” and Democrats received over a million more votes nationwide, yet because of shrewd gerrymandering Republicans obtained a 33-seat House majority.

The goal of Project REDMAP is to take what was done to Wisconsin and replicate it in as many other States as possible.  And, most likely, those States’ voters will never know about it until it is a done deal.  In the Wisconsin redistricting challenged by Gill, the process was accomplished in secret. Republican legislators were allowed to see only the maps of their own districts, and only after they were compelled to sign non-disclosure agreements. Democrats were not allowed to see them until they were introduced on the floor of the legislature, where they were outnumbered and powerless. 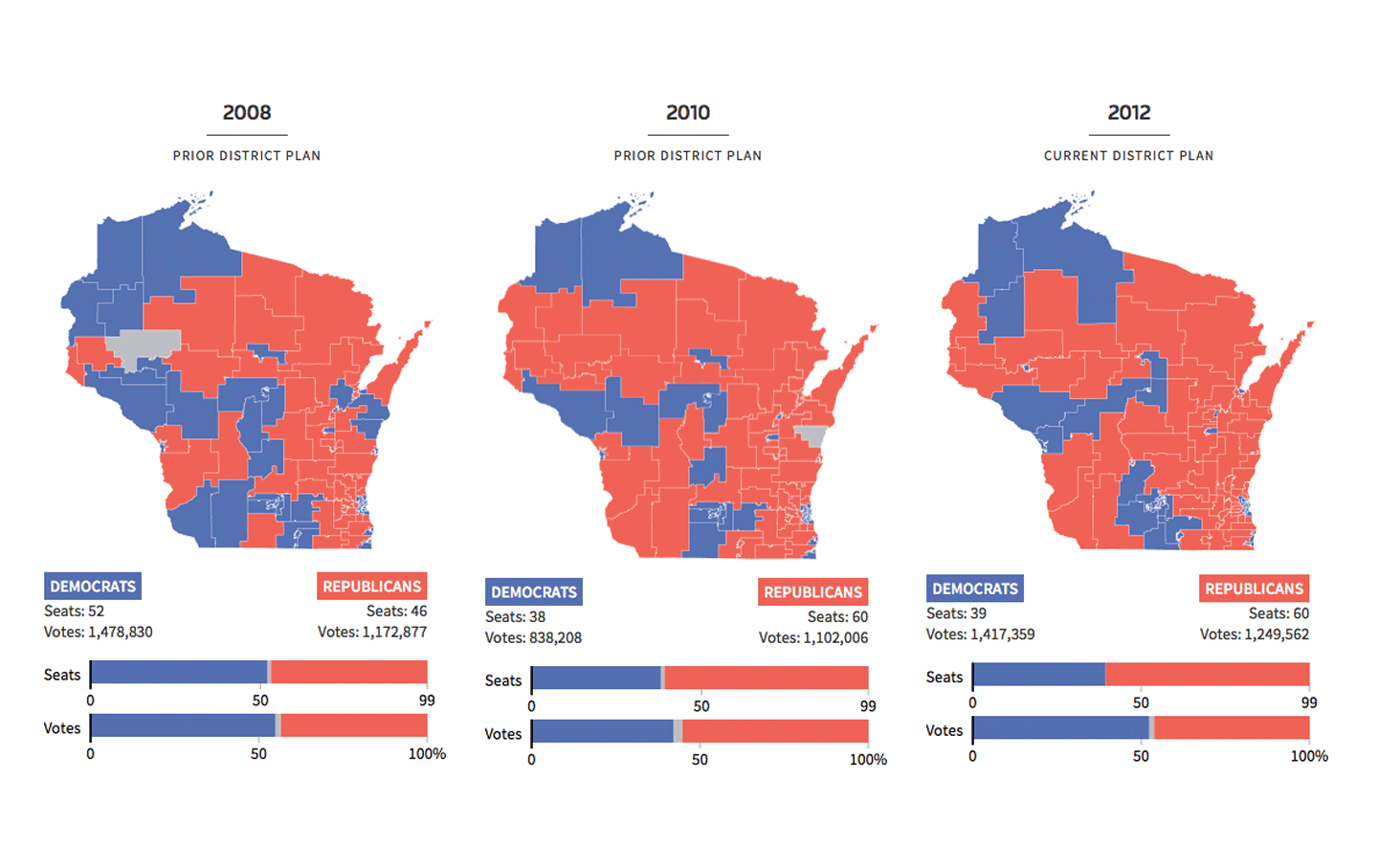 Thus is demonstrated the power of State legislative control. If one party controls the mechanism of redistricting in a State, that party can distort the State’s representation in the U.S. House of Representatives, which is itself already undemocratic in that small-population rural States (Wyoming, Montana, the Dakotas) are given at least one representative, even if that State’s population is half that of a single district in a large-population State.

What makes the process much scarier is that there are two more movements rumbling around in Republican circles.  One is the tying of presidential electoral votes to House districts. Under such a plan, the winner-take-all system used by 48 States would be replaced by the one now used in Maine and Nebraska. In those two States, each candidate receives one electoral vote for each House district won, and the State’s overall winner would get the two votes represented by the Senate seats. Had that plan been in place at the time, the presidential elections of 1960 and 1976, for example, would have had different outcomes.

The second threat to democracy now appearing is a call first heard at significant volume in 2010, namely, to repeal the Seventeenth Amendment.  That amendment changed the way U.S. Senators are chosen.  The Constitution originally called for them to be selected by State legislatures, and the amendment (effective in 1913) required that they be elected by popular vote. The call for repeal counts among its supporters Senators Mike Lee (R-UT), Jeff Flake (R-AZ), and Ted Cruz (R-TX), as well as former governors Rick Perry of Texas and Mike Huckabee of Arkansas. Project REDMAP has helped Republicans gain complete control of 32 State legislatures.  With 34, they could begin the process of repeal, and with 38 they could complete it.  The result would be a permanent House majority along with an overwhelming Senate majority of 76 members, effectively making the United States a one-party nation.

Fortunately, there is strong opposition to this menace, and it is bipartisan.  In the immediate case, Gill, an amicus brief supporting the plaintiffs  has been submitted by Republican governors John Kasich and Arnold Schwarzenegger, as well as Senators John McCain, Robert Dole, and Richard Lugar, among others.  Prominent Democrats, of course, have filed such briefs as well, along with bipartisan groups of current and former State legislators and current and former Members of Congress. Two Wisconsin legislators – a Republican and a Democrat – are on a lecture tour explaining what the case is about and what the stakes are. You can read/hear their story as revealed in an NPR broadcast from September 29, 2017.

There is yet another potential harm that comes from excessive partisan gerrymandering. The party doing the redistricting will usually be driven further towards its extreme faction. This can be seen in the case of Republican incumbents in safe districts who fear a primary-election challenge from the right-wing “base.” These incumbents must tack a harder course themselves, because primary elections generally draw each party’s most fundamental voters, seeking the most extreme candidate. Many incumbents fear being “primaried,” and – as the recent Republican Senatorial primary in Alabama shows – with good reason.

From all this it is clear that Gill v. Whitford is potentially the most important case SCOTUS will decide in the foreseeable future. Although some observers, such as columnist Michael Barone, don’t consider the case to be a big deal, our democracy is at risk. Yes, it is. Let us watch closely the activities in the court’s deliberations.  Moreover, let us pay attention to the damage that can be done at the State level, which can be much more serious than that wrought in Congress.

2 thoughts on “ONE-PARTY GOVERNMENT: THE NEXT STEP IN GERRYMANDERING     ”