I have friends who are smokers. Their number is fewer than it used to be, not only because fewer people smoke, but also because I am now in my sixties, which means that quite a few of my smoking contemporaries have died. In many cases, their death was brought about or hastened by their smoking, but that is not my topic here.

I do not consider smoking to be a result of low morality or weakness of the will. I do not consider smokers as a group to be nasty, dirty, or evil. In fact, I grew up in a smoking household. My mother smoked for 45 years. That fact brings me to the point of this essay.

When I was a youngster, I often visited the homes of friends and schoolmates and noticed a strange smell. It was not a foul smell, but it seemed abnormal. What was it? Dust, I finally decided, in the absence of any other explanation.

It was only after I grew up that I understood the source of that foreign smell. After I left home and returned to visit my parents, it became clear to me that, as a child, I had visited nonsmoking homes that smelled normal. My home had smelled like an ashtray, and I thought that was normal. 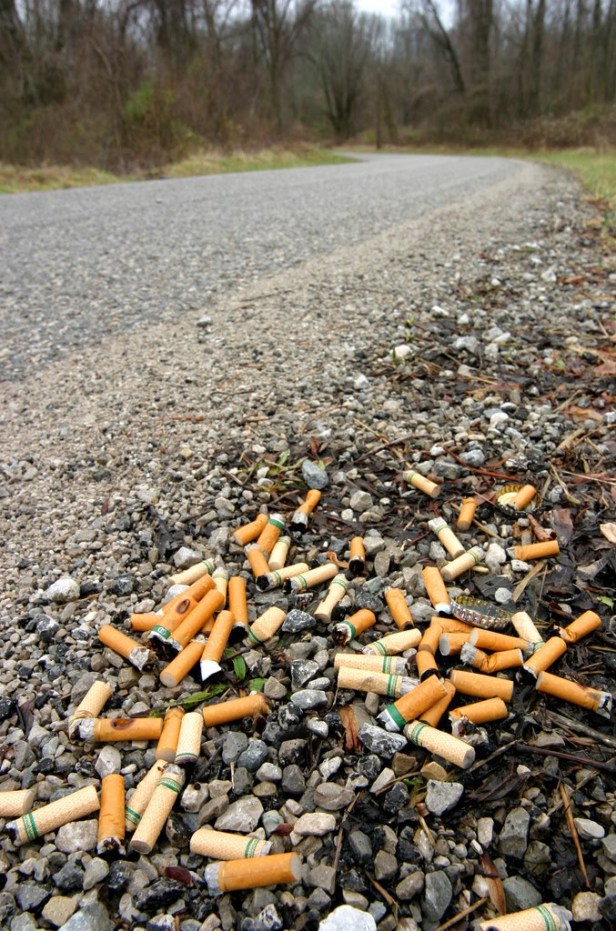 Of course, in those days, a sizable majority of men, and perhaps half of women, smoked. Smoking went on almost everywhere. It was illegal to smoke in theaters (because of the danger of fire) and places such as church sanctuaries and school classrooms (below the college level) had their own rules of banishment. Decades ago, The College of Wooster, a stoutly Presbyterian school, was a collegiate anomaly in that smoking was banned everywhere on its grounds. A public street ran through campus, and smokers took refuge there.

One might imagine the piles of butts to be found on that street in Wooster. Today, as the practice of smoking has declined, the practice of throwing used cigarettes on the ground has remained. You have to be on a quiet street in a Mormon town before the butts-per-block count drops below fifty. Curiously, cigarette smoking was encouraged over a century ago to reduce an unhealthy habit, spitting in the street. Tobacco was widely chewed rather than smoked in those days. It was the prevalence and lethality of tuberculosis that caused local governments to try to control spitting as a means to diminish the spread of this disease.

With cigarette smoking, however, came a whole new set of disposal practices. Until 25 or 30 years ago, smokers were in the majority, and thus set the rules of smoking etiquette. If I sat in a meeting with 12 people, eight of them were likely to be smoking. If any of the others said anything about it, they were considered at best priggish and at worst peculiar. The smokers were likely to ridicule them and blow smoke directly into their faces.

In an astonishingly short time, however, as the percentage of smokers declined and the dangers of second-hand smoke were widely publicized, it was the smokers who were put on the defensive. Now it is they who are subjected to restrictions by the will of the majority – the nonsmokers – who often are accused of “smoke-shaming” those who still practice the habit. If you want to know how widespread this is, start here.

Today, many smokers complain that they are picked on, insulted, or scolded by zealous nonsmokers. They feel abused, harassed, and humiliated by having to find a place where smoking is allowed in order to light up. They feel like the Biblical lepers, condemned to isolation and expected to cry out, “Unclean! Unclean!” whenever anyone approached.

Alas, smokers have brought this opprobrium upon themselves. It is their habits left over from the days when they were the majority and could do as they pleased that are subjecting them to the hostility of the new majority who are exercising their authority, which is backed not only by their numbers, but also by law.

Let me say categorically that I know that not all smokers are slovenly, heedless, or inconsiderate. Many are quite conscientious about respecting the environment and rights of nonsmokers.  I appreciate that.  I really do.

Smokers, if you would be better received and better regarded, here are some ways to accomplish that:

First, stop treating the world as your ashtray. One winter years ago, the house across the street from me caught fire. Most of the neighborhood gathered in my yard to watch that fire all night. The next spring, when the snow melted, I found my lawn was wall-to-wall cigarette butts. That happens anywhere crowds gather. People who would never think of common littering still consider tossing a used cigarette on the ground acceptable behavior.

So, smokers who do that, please stop. It’s not only unsightly, but those butts take years or decades to decompose, and contribute toxins to the environment. Tossing butts is also dangerous. I’ve personally seen mulch fires started around the landscaping in front of buildings. And stop throwing butts out of your car windows, too. A few years ago a butt thrown from a passing car ignited a fire in a load of cardboard in the bed of a pickup truck on I-75 in northwestern Ohio.

So use the ashtray in your car. I am aware that most cars are no longer built with ashtrays in them, but you can buy one. You can get them for free here.  When your ashtray is full of butts, dispose of them properly.  Don’t just open your door and dump them on the pavement for the taxpayers to clean up.

Another way to clean up your act: show consideration for nonsmokers. When smokers congregate while standing, they tend to hold their cigarettes behind them so the smoke drifts toward others. At the table, after they take a drag they turn their head away from the others to exhale. Nonsmokers assume you like the smoke, so why are you directing it at them?

As smokers find acceptance from fewer nonsmokers, they have taken to huddling in groups. That’s fine, as long as it does not infringe on the right of nonsmokers to breathe clean air. So, smokers, please don’t congregate around the entryways to buildings, making everyone else run a gantlet of fumes just to get inside. And please wait until you get to the smoking area before you light up. Nonsmokers notice when the lobby of a building stinks because the smokers fired up their cigarettes inside and then stepped out.

Finally, there’s another thing that irritates nonsmokers. The behavior of smokers embarrasses us. When I worked for the government I always saw all the smokers puffing in front of the office, and the employees at the Department of Health (yes, the Department of Health) next door smoking on the fire escape and flinging their butts down into the yard in front of the buildings.

This behavior reinforces the stereotype of the goof-off government worker, which reflects badly on everybody. But in this case, there is some truth to it. For as long as I can remember, standing around shooting the breeze at work has been frowned on and often punished – with one exception. If you’re smoking, then it’s condoned and permitted without censure.

The smokers I knew at work took a lot of smoke breaks. Consider those who consume just one pack a day. That’s more than one cigarette per waking hour, and I’ve known people who smoked three packs a day. But let’s stick to the very light workday smoker, say, a modest four smoke breaks in an eight-hour day at a modest ten minutes per break. That adds up to forty minutes.

Forty minutes is one-twelfth of a day spent outside, standing around smoking. This yields the astonishing statistic that, over the course of a year, smokers work one month less than nonsmokers. Nonsmokers find that offensive.

Again, smokers who act responsibly about the ancillary parts of your smoking, I hear you.  I understand and appreciate your conscientiousness. However, the slob smokers will not take suggestions from me or any other nonsmoker. They might listen to you, though.  Encourage your friends to be good citizens about their habit. Things will go better for all of you as well as for all of us.