The motor vehicle laws of every State include speed limits. In my State, it’s 25 mph on side streets, 35 on main streets, 60, 65, or 70 on open highways.  At least, that’s the official limit.  Everybody knows that’s not the real limit, but nobody knows what the real limit is.  You’re not going to be ticketed for driving 69 in a 65 zone, but 79 will likely (but not always) get you a citation.

The rules governing big-time college sports are like that.  Some programs are driving 70, some are driving 80, and some more than that.  It’s like NASCAR: “If you ain’t cheatin’, you ain’t tryin’.”  And if you don’t cheat, you won’t win, because everybody else will be cheating.

A few days ago, the FBI announced the first in what will no doubt be a series of bowling-ball drops in an investigation of corruption in college basketball.  Apparently, shoe companies, players and their families, coaches and universities, and agents and financial advisers were all involved in a scheme of huge payouts to get certain basketball players to attend certain schools.

The obvious response is – or should be – “This is news?”  Seriously – up until now we all thought that college sports was a bastion of pure amateurism?  That “student-athletes” were just ordinary college students, subject to the same admission and academic standards as all other students, but who just happened to fit in a little basketball or football between their calculus class and their chemistry lab?

Nonsense. No one – literally no one – contends that this is the case.  The “dumb jock” who can scarcely write his name is a stereotype over a century old. I challenge you to find me anyone who doesn’t agree that college basketball and football are thoroughly rotten, and that the higher up in status your program is, the more corrupt it is are likely to be.

The evidence has piled up since the beginning of intercollegiate athletics. The first such competition, a rowing event between Harvard and Yale in 1852, was contrived by a railroad owner to make money, and the players were promised (and given) valuable rewards and unlimited alcohol. From there, honesty in college sports started going downhill.  By 1905, Charles Eliot, the president of Harvard University, was bemoaning the lack of effective oversight by the NCAA. “It is childish to suppose,” he wrote, “that the athletic authorities who have permitted football to become such a brutal, cheating, demoralizing game could be trusted to reform it.”

Has anything changed since then?  Yes. It has gotten worse.  Particularly over the last couple of decades, colleges have turned ever more increasingly to sports as a way to bolster their “brand.”  It is not just an issue at academically noncompetitive schools, either.  Even the Ivy League schools and the military service academies have lower admissions standards for “recruited athletes,” whose acceptances outnumber those of any other privileged or favored group.

The University of North Carolina at Chapel Hill, long regarded as one of the premier public institutions of higher learning, is a typical example. It was found that out of the 183 players on UNC’s football and basketball teams, three-fifths were at a fourth-to-eighth-grade reading level.  Ten percent were reading below a third-grade level.  Is this representative of the typical UNC student?  Of course not, and everybody knows it. The woods are full of “student-athletes” who completed four years of eligibility at major universities yet were unable to read. In UNC’s case, sports came first, as that intellectual bastion of the “Southern Ivy League” threw its academic reputation under the bus to protect its athletic department from punishment. They did it by saying that the no-attendance, no-work classes that got UNC in trouble were not just for athletes; any student could take them. That removed the issue from the NCAA’s jurisdiction to that of the university’s accrediting body.

And, once admitted, these unqualified students are allowed – indeed, guaranteed – to remain until they either grossly embarrass the university by bad behavior or are no longer useful to the basketball or football team. Winning basketball and football programs are considered the crown jewel of a university’s “brand,” by extension conferring a winning reputation on everything else, from the beauty of the campus to the future successes of the alumni.

With the very basis of college athletics being a debased fraud of phony students, pious references to “pageantry” and “tradition,” and appeals to the purity of an amateurism that has never existed, it is puerile to feign that we are shocked – shocked! – by the FBI’s sudden revelation that the system is corrupt.

It is long past time to end the charade. Everyone knows, or certainly should know, that big-time college football and basketball programs are just minor leagues for the NFL and NBA. In reality they are themselves professional leagues, with the NCAA (created and run by the universities themselves) existing as a fake oversight commission ensuring a $20,000 to $50,000 per year salary cap.

Once professionalism is acknowledged, the corruption and sleaze will be rendered unnecessary. The payoffs, the academic fakery, and the exploitation of both the athletes and the rest of the students (who are mostly unaware that the “General Fee” they pay each semester is largely for the support of intercollegiate athletics) will end. 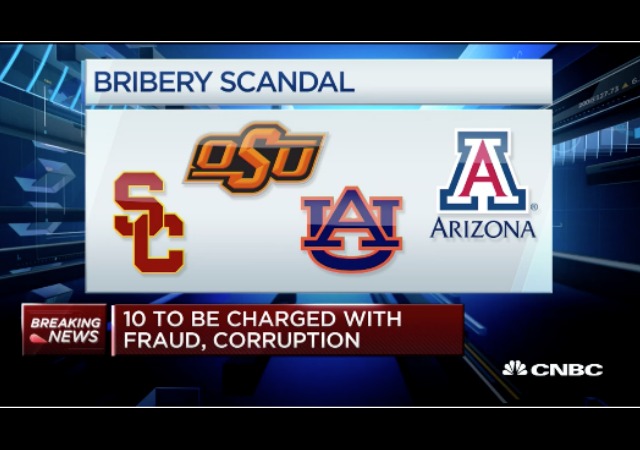 Here’s how to do it:

First, separate the athletic department from the rest of the university. This is partially the case now, in that the money generated from high-level football and basketball is rarely if ever shared with the university at large, which nevertheless is responsible for building and maintaining the arenas, stadiums, practice facilities, lavish coaches’ offices, and other ancillary buildings, since they fall under the capital improvements budget and not the athletic budget.

This separation will also relieve the athletes of the burden having to pretend to go to college. They can focus on what they are there for – basketball or football.  It will also allow them to be directly paid.  Let the athletes sell their talents at whatever price the market will bear. The money is there – or will be there – to reward them quite handsomely. With the athletes prohibited from getting it, and the athletic departments loath to give it to their universities’ general funds, the only place left for it to go is to the coaches and athletic administrators, who are richly compensated.

Where will the money to pay the athletes come from? Naturally, a lot can come from television broadcasting royalties, ticket sales, and other current sources. But it also can – and should – come from the NBA, the NFL, the players’ agents who hope to make a fortune from the players’ future earnings in the big leagues, the shoe companies and other equipment and apparel manufacturers, and the “jock-sniffers” (wealthy “boosters” who get a vicarious thrill from being able to hang around with the athletes and coaches).

It’s a pretty simple fix, and it will be a lot more transparent, more manageable, and definitely more honest than the dirty, underhanded, lying, cheating fraud that is college athletics today.

One thought on “SURPRISE! COLLEGE SPORTS ARE CORRUPT!”