Today (June 14) is “Flag Day.” The fact that the American flag gets its own day shows its importance in American culture. As much as any nation on Earth, the United States reveres, venerates, and deifies its flag.

“Deifies” is not too strong a word. The American flag is an object of worship beyond any expectations of patriotic respect. It even has its own creation myth. According to this long-discredited story, George Washington (the USA’s secular equivalent of God the Father-Creator) asked Betsy Ross of Philadelphia to design and sew together the first American flag. Ross thus becomes the Mother of The Country and a secular equivalent of the Mother of God. The only thing preventing full reverential treatment in this story is that Betsy Ross was not a virgin (she was ultimately married three times).

That the story isn’t true has not stopped such organizations as the Constitution Center from swallowing it whole as presented by Betsy Ross House, an enterprise devoted to keeping the myth alive.

Flag Day itself was established by presidential proclamation in 1916, and by Act of Congress in 1949.   June 14, 1777, was the date the Second Continental Congress passed legislation detailing the design of the American flag: “Resolved, That the flag of the thirteen United States be thirteen stripes, alternate red and white; that the union be thirteen stars, white in a blue field, representing a new constellation.”

Although the USA is not the only country that has made its flag a sacramental-cum-commercial icon, and many other nations have laws against dishonoring their national flag, foreign visitors are often struck by the abundance of flags everywhere in the United States and the extreme defensiveness that surrounds its use and abuse. The flag is invested with so much nationalistic significance, that it has often been used to represent particular political values. During the Vietnam War, small decals of the flag were widely distributed, particularly by Reader’s Digest, which included them in its monthly magazine. These decal flags soon appeared on car windshields everywhere in the country. It was never explicitly stated, but the inference was that a flag decal on your car indicated your support for the war and the lack of it suggested insufficient patriotism.  They were so ubiquitous that John Prine even wrote a song about them, “Your Flag Decal Won’t Get You Into Heaven Anymore.”

At the same time, the flag lapel pin became popular, and today is still considered de rigueur for Democratic Party politicians, lest their patriotism be questioned. Republicans are presumed to carry enough patriotism that the lapel pin is not necessary for them. As the war grew more unpopular, young people began mocking the display by wearing American flags sewn to the seat of their jeans. By the 1970s, war fatigue and weariness resulted in indifference to this once-shocking display, and as it lost its ability to outrage it went out of style.

Nevertheless, there is a certain segment of the American population for whom the flag is sacred, for whom any appearance of disrespect – or, indeed, insufficient enthusiasm in veneration – shown to it has the same effect a full moon is purported to have on a werewolf. This group includes those whose vehicles display bumper stickers decrying flag-burning or announcing, “These colors don’t run!” They go out of their way to insist on flag patches on little kids’ athletic team uniforms or beginning each public meeting with the Pledge of Allegiance (which is itself quite a story, but that is for another post).

There is continual support for a Constitutional Amendment to make it a criminal offense to “desecrate” the American flag. The word itself is the antonym of “consecrate,” which means “to declare sacred” and emphasizes the religious undertones of flag-veneration. Periodically, boomlets in this effort arise, usually in response to some isolated flag-burning, flag-stomping, or flag-altering (such as affixing a “peace symbol” to it) by political outsiders.

For many years, most States had laws against flag desecration, and the United States Flag Code has often been cited as if it were statute law (which it isn’t). The Flag Code is replete with elaborate directions for displaying the flag in various circumstances. If the Flag Code were indeed law, which of us would not be guilty of some technical infringement?  The Code expressly states, “The flag should never be used for advertising purposes in any manner whatsoever.”  That alone would fill the prisons with violators.

Additionally, according to the Code:

“The flag should never be carried flat or horizontally, but always aloft and free.” 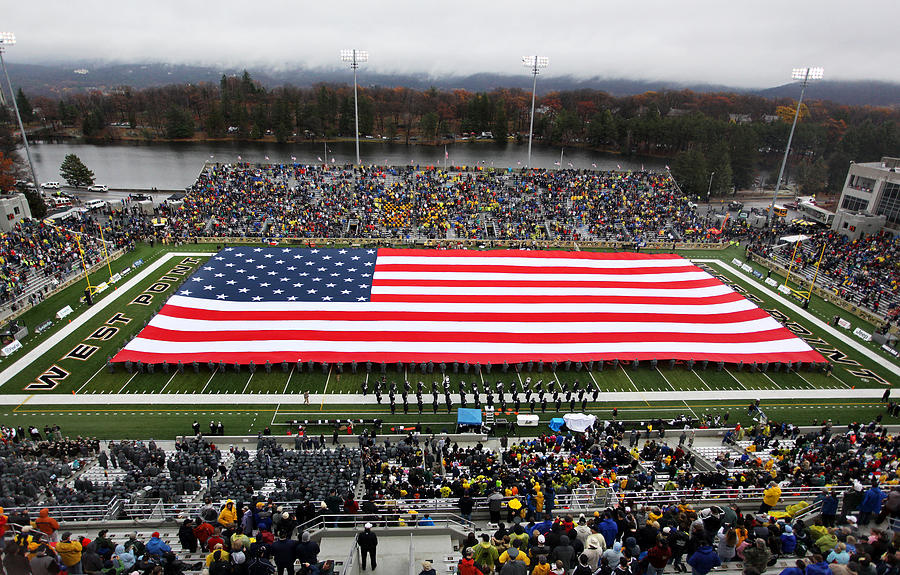 “The flag should never have placed upon it, nor on any part of it, nor attached to it any mark, insignia, letter, word, figure, design, picture, or drawing of any nature.”

“The flag should not be draped over the hood, top, sides, or back of a vehicle or of a railroad train or a boat.”  This is a commercially-sold car cover: “When the flag is displayed on a motorcar, the staff shall be fixed firmly to the chassis or clamped to the right fender.”

And then there’s this patriotic display: 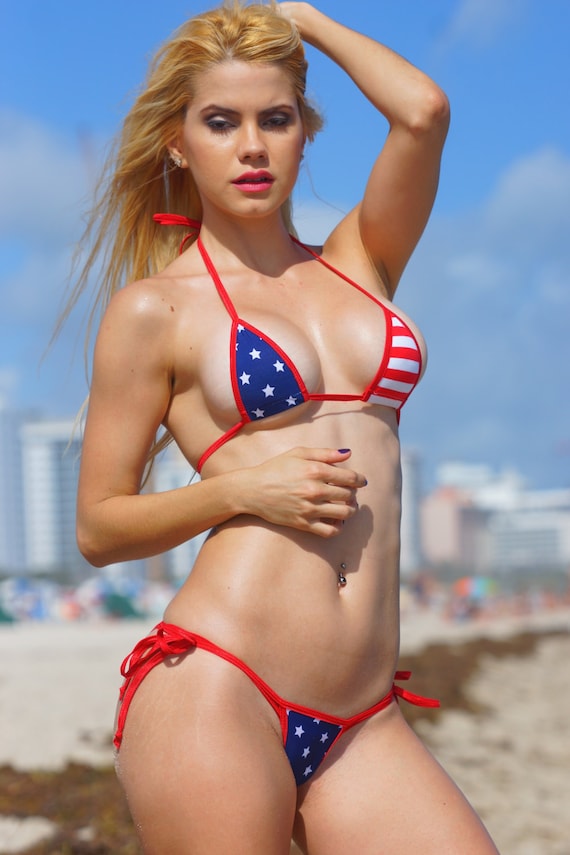 In the 1989 case Texas v. Johnson, the U.S. Supreme Court struck down State laws against flag desecration, with Justice William J. Brennan writing in the majority opinion, “We do not consecrate the flag by punishing its desecration, for in doing so we dilute the freedom that this cherished emblem represents.” The Court held that freedom of expression was at the heart of the case, and that since the “proper” way to dispose of an American flag is by burning, the law in question made the crime not performing an action, but performing an action while in a certain frame of mind. Thus the law punished not what the offender did, but the offender’s reason for what s/he did.

This exhaustive description makes an important philosophical point, namely, that there cannot be a symbol of a symbol. The flag itself is a symbolic object, thus any representation of it becomes a flag itself. If you have a paper cup with a flag printed on it, it is a flag. A prohibition on flag desecration would mean you could not throw the cup into a trash can. If a paper cup seems too trivial to worry about, then what should be done with this disposable tablecloth sold by the United States Flag Company? Must it be respectfully burned in a flag-retirement ceremony instead of discarded with the trash from the Fourth-of-July party? 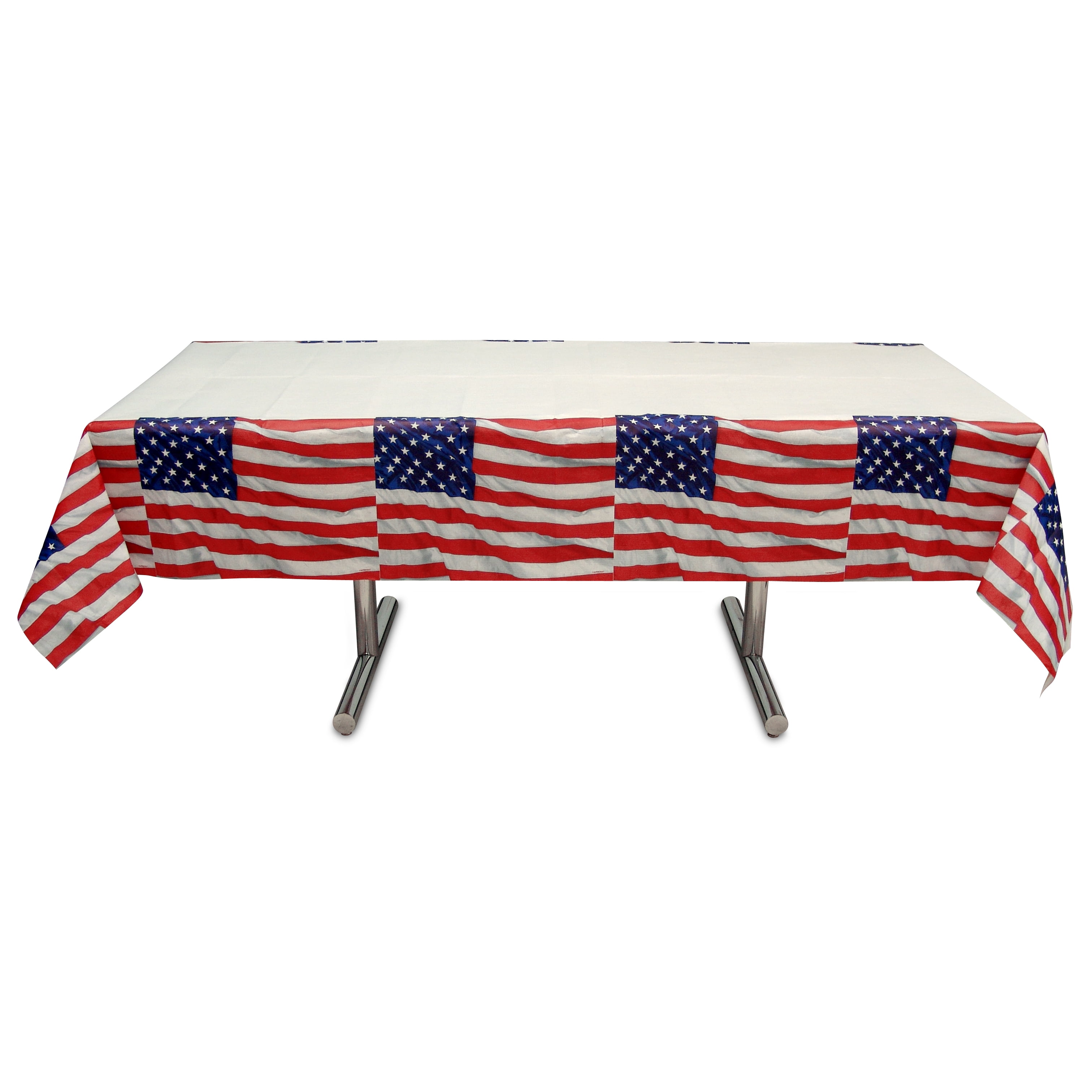 In any case, how vital is it to have a law about dishonoring the American flag? To hear the flag-worshipers talk, you’d think flag-burning goes on all the time, but it is actually rare. So is the proposal to criminalize flag-desecration intended to protect the poor, defenseless flag? When I taught history and government, I used to ask my students if they thought a Constitutional amendment against burning the American flag would result in fewer flag burnings or more flag burnings. Invariably, they answered “more.” High school students can see that such a law would only provoke more violations for political reasons.

So if such a law will not deter flag desecration, what is its purpose? Alas, like so many other laws and proposed laws, it is merely a casus belli – the reason for a fight. Like many of the picayune legal elaborations on volatile issues (two salient examples being gun rights/restrictions and abortion rights/restrictions), the flag desecration argument is a gesture.  It is mainly about who can make whom bend to their will. It is put forward so that one side or the other can say, “Ha, ha, we beat you!”  Not a very good reason for making law, much less amending the Constitution.

One thought on “PROTECTING THE AMERICAN FLAG”