Many years ago, gambling celebrity “Jimmy the Greek” Snyder made a prescient observation about legal gambling. “Keep it in Las Vegas,” he said. “It’s out of the way and hard to get to.” What Snyder was driving at was that legalized gambling is a dangerous thing if it is made too accessible, as the large number of habitual gamblers and poor money-managers who could not afford regular trips to Vegas would be easily defunded if they had to go no further than their local casino.

In 1992, the U. S. Congress passed the Professional and Amateur Sports Protection Act  (PASPA), which prohibited States that did not already allow betting on individual sporting events other than horse racing, dog racing, and jai alai, from doing so Impetus for the Act came from both organized sports leagues (particularly the National Basketball Association, which is uniquely vulnerable to point-shaving schemes) and from States where forms of sports betting were already legal, notably Nevada. The law derived its authority from the Constitutional power given to Congress to regulate interstate commerce.

On May 18, 2018, the U.S. Supreme Court, in a 6-3 decision, ruled  in Murphy v. National Collegiate Athletic Association that PASPA was unconstitutional. The court majority held that PASPA violated the Tenth Amendment, which bars Congress from prohibiting State autonomy in matters not otherwise addressed in the Constitution.

The current spate of State-sponsored gambling is a relatively new phenomenon. State governments raised money through lotteries long ago, but the fashion died out early in the Twentieth Century as varieties of direct taxation blossomed. In 1964, New Hampshire, a State without a sales tax or a tax on earned income, established the first modern State lottery. Within a couple of decades, such lotteries had become common. In mid-1980, New Jersey permitted casino gambling in Atlantic City, in an effort to revive the fading fortunes of the tawdry seaside resort. Casino gambling expanded dramatically nationwide once American Indian reservations started establishing them. 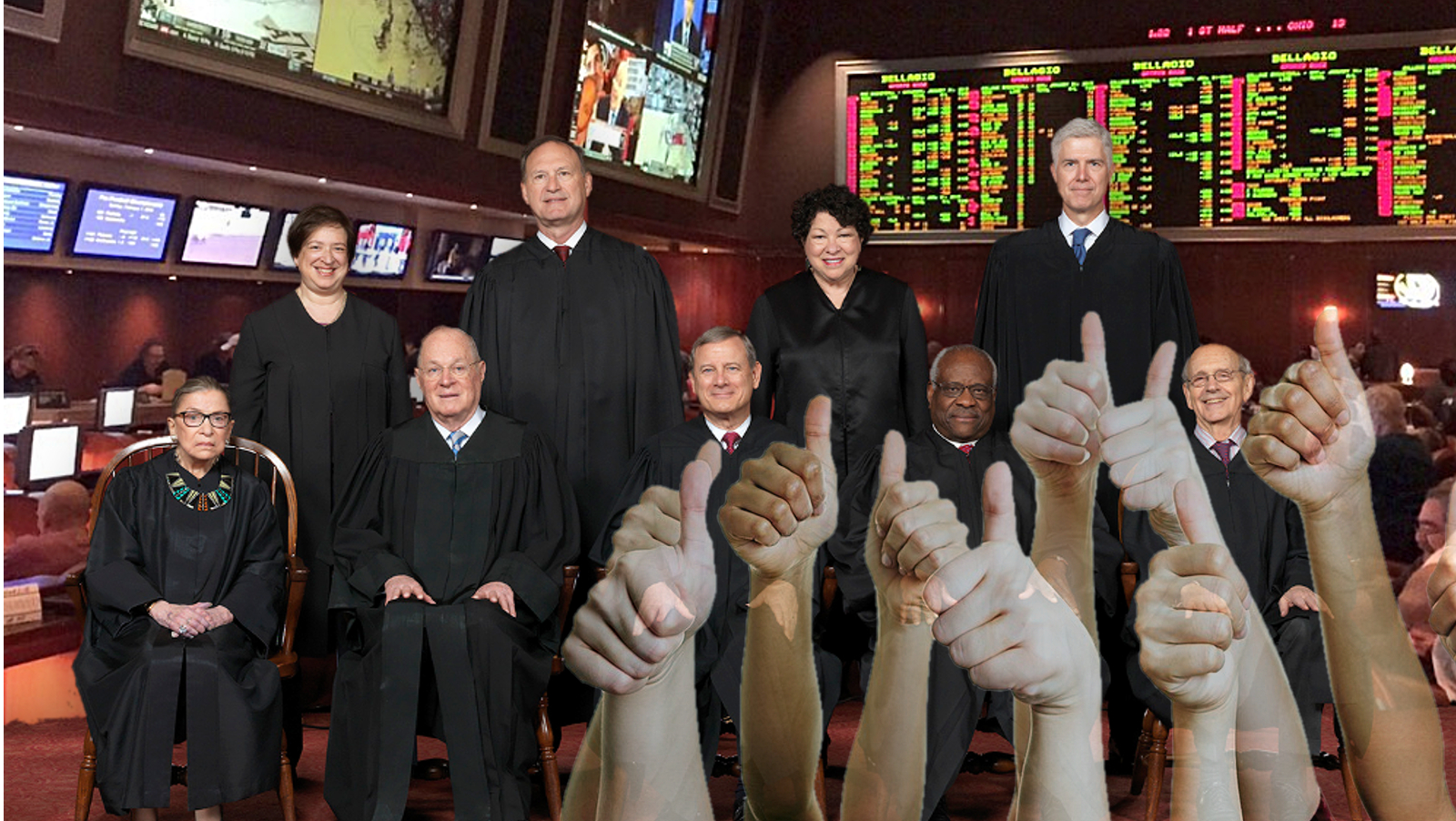 This is one of the dangerous features of legalized gambling. It creates a competitive atmosphere in which States – although not necessarily desiring lotteries, casinos, or other forms of betting – feel pressured to vie with neighboring States that already have them. The thought of people crossing the border to lose their money in the next State and then bringing their gambling-caused social problems back home is too much for governments to withstand. The clamor for casinos at home eventually wins out.

In most cases, the States have tried to put a gloss of respectability on gambling. The first State lotteries were usually justified by promising that the profits would go to a worthy cause, usually education. In my State, Ohio, and many others, that has turned out to be a disaster for public education. The amount of money produced by lottery profits is a tiny portion of the cost of education, and almost all that is produced is offset by cutting a similar amount of education funding from other sources in the State budget. Through a combination of a misleading sales pitch and a bookkeeping trick, citizens came to believe that the lottery took care of school funding. Thus many voters became convinced that passing local school taxes levies was unnecessary because the lottery proceeds took care of most of the cost of public education.

When casino gambling began to spread, it was given a quaint patina of acceptability in several States by recalling the romantic riverboat casinos of Old West lore. Numerous States allowed casinos only if they were on water. The “riverboats” didn’t actually travel. In fact, they were not boats at all, but just gambling houses on barges tied up to docks. Once the public began to accept the idea of casinos, rules were relaxed and the whole affair took on a humdrum status.

This links to another problem with State-sponsored gambling. As shown by studies from the Rockefeller Institute of Government, gamblers quickly tire of existing games. More elaborate betting systems with bigger and bigger prizes are required as the participants demand an ever-increasing fix. When the Ohio Lottery was first established in the mid-1970s, it conferred a weekly prize of one million dollars, taxed and paid out over ten years. The tax structure of the time meant that about 70 percent of that million never got to the winner, who was left with about $30,000 a year for ten years, with its value diminished annually by inflation. The lines for lottery tickets stretched around the block from the door of every lottery outlet.

It is easy to see where things have gone since then. Multi-State lotteries such as Powerball often yield an immediate, after-tax prize in the hundreds of millions of dollars. Yet the system must still be tweaked to increase the prizes in order to keep consumers interested. Many players say they won’t bother buying a ticket until the jackpot is at least nine figures.

State lotteries are just a legal version of the old organized-crime “numbers racket,” which States banned years ago, presumably because they were unfair and paid off inadequately. The numbers racket payout was usually 600 to one on a three-digit number. State lotteries typically pay out 500 to one. Let that sink in. In addition, the State lotteries have often been more subject to being fixed than the street rackets.

Casinos are another kind of racket. It is interesting that one rarely hears officials talk about casino “gambling.” They call it “gaming.” How appropriate this is, since casino play is not gambling at all. It’s a sure thing for the house. Having a casino license is like having a license to print money. You can’t lose on overall betting, and only poor management or a decline in gambling across-the-board will keep you from making a real profit. In States (such as, again, Ohio) where there are a strictly limited number of casino permits, those permits are like gold. The ways in which they are distributed is often a story of corruption and deceit.

Now comes the Murphy decision. Sports betting will soon be established in several States, and those without it will have to adopt it in order to keep up. It is sad that States must not only be the direct and indirect purveyors of a system that separates the foolish and unfortunate from their money, but also proclaim that it is a public benefit.