Things have changed since I wrote a post in March 2015 about the Supreme Court case of Walker v. Texas Sons of Confederate Veterans (read it here).  I learned some things (may I not learn?) and as a result I’ve changed my opinion.

The Court returned a 5-4 decision (with Clarence Thomas joining Justices Breyer, Ginsburg, Kagan, and Sotomayor to form the majority) to uphold the right of the State of Texas to deny the creation of a specialty license plate for the Sons of Confederate Veterans which would have borne their emblem, which includes the Confederate battle flag.

The majority opinion (which overturned a lower court ruling) was written by Justice Breyer, and held that a license plate is property of the State, and therefore any message delivered on it is a message from the State.  The dissenting opinion, written by Justice Alito, considered the State’s action a suppression of free speech with which it disagreed.

I accept now that a license plate is property of the State, and thus any speech contained on it is State speech, not merely the speech of the person on whose car it is displayed.  People are still free to display (and they do) just about anything in the form of a sticker, sign, badge, etc.  The State has the authority to restrict what may be shown on license plates to protect its own interests.  If the SCV wants a specialty plate, it sounds like the State of Texas will approve one without the offensive flag.

The Charleston murders have brought the Confederate flags to the forefront of public interest and opinion, and it points out that pure and direct State speech often includes the Confederate battle ensign.  As of this writing, it still flies on the State Capitol grounds of South Carolina (with specific – and very strong – protections), and it is included as a part of the State flag of Mississippi. [Update: On July 10, 2015, the Confederate battle flag was removed from the South Carolina Statehouse grounds.]

At this point, it is important to once again establish the distinctions among the various “Confederate flags,” because most people – journalists and commentators included – get it wrong.
What most people intend when they refer to – and what they envision when they think of – the Confederate flag is this, which they are most likely to call “The Confederate Flag” or “The Stars and Bars.” 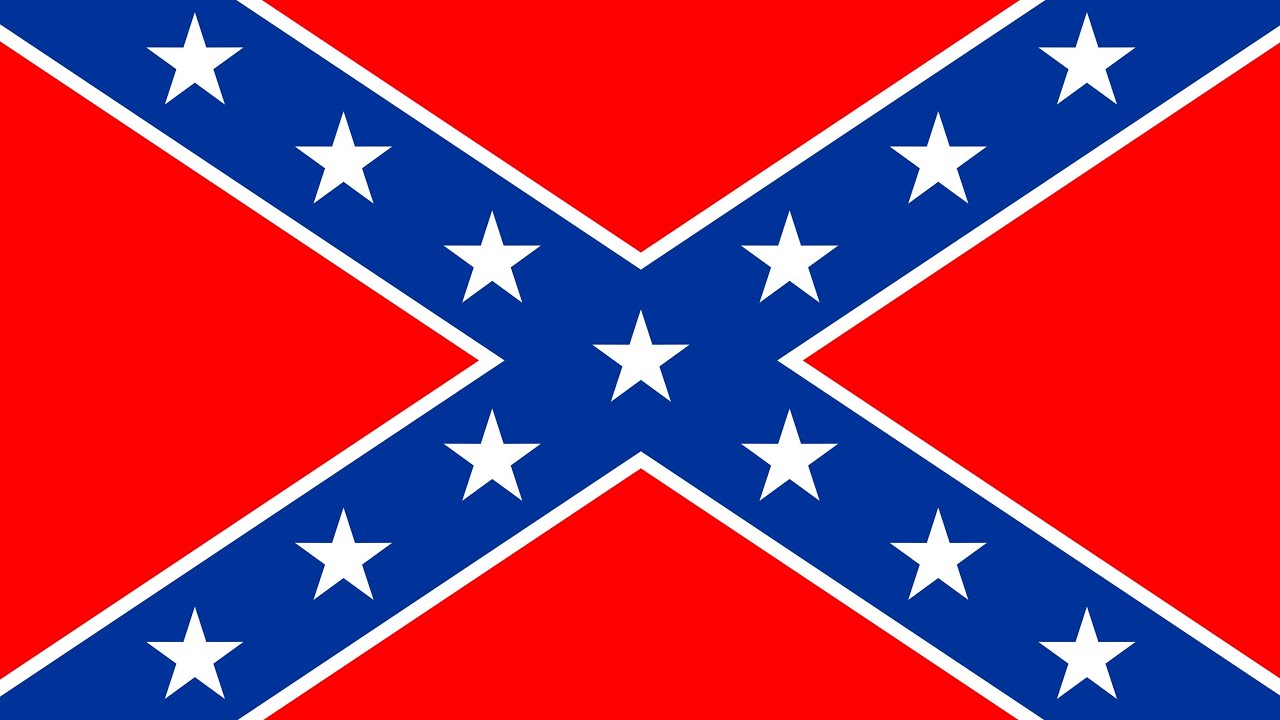 The official flag of the Confederate States of America has three versions.  The first, in use from 1861 to 1863, is this one.  It is the flag properly called “The Stars and Bars.”

The second flag of the Confederacy, in use from 1863 to 1865, is known as “The Stainless Banner.”  Although the act of adoption of this flag did not specify what the white field represented, its designer, William T. Thompson, left no doubt by proclaiming, “As a people we are fighting to maintain the Heaven-ordained supremacy of the white man over the inferior or colored race; a white flag would thus be emblematical [sic] of our cause.” Thompson predicted it would be “hailed by the civilized world as the White Man’s Flag.”  Here is that flag: 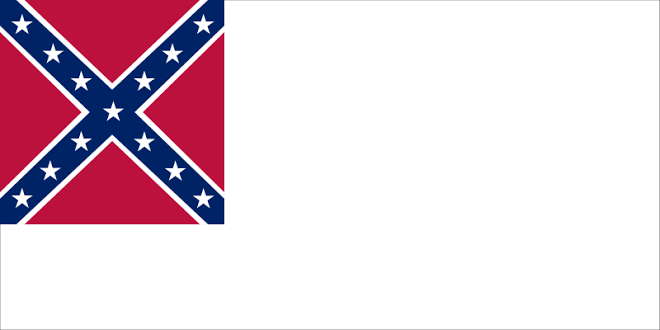 In 1865, it was decided that the white field occupying most of the Stainless Banner allowed it to be too easily mistaken for a white flag of surrender during the confusion of battle.  A vertical red bar on the right edge was added for the last six weeks or so of the war.  This flag is known as “The Blood-Stained Banner,” and it looks like this:

So, if the flag everybody argues about is neither “The Stars and Bars” nor the flag of the Confederacy, why is it the one everybody knows and is seen all over the country, while the true national flags of the Confederate States of America are virtually unknown?

The commonly-seen “Southern Cross” is in fact the banner used in battle by the rebellious armies of the South.  It was not a national flag, but a military ensign.

Thus the Southern Cross is not the emblem of the Confederate States of America, but of their military forces when engaged in action against the United States of America.  That clearly makes it an symbol of “levying War against” the United States, which is one of the Constitutional definitions of treason.  To the secessionists and their spiritual heirs, the Southern Cross conjures memories of the “Lost Cause,” but the cause that was lost was a tainted one.

Southerners are the only Americans who have been invaded and defeated in war on their own soil, which gives them a unique sense of victimization.  The greatest of Southern novelists, William Faulkner, in Absalom, Absalom made the observation that Southerners immerse themselves in their history and heritage so that perhaps someday they may “know at last why God let us lose the war.”

So it is that when Southerners are asked to explain their attachment to what should be a symbol of rebellion and an unjust and oppressive social system, they will tell you it is not about rebellion, not about slavery, not about racism, but about their heritage.

I am constrained to ask, “Heritage of what?”  The heritage they are honoring is one of racism, slavery, and rebellion.  A strange perversion of the Southern myth has gained currency over the years, claiming that the Civil War was not about slavery.  That is simply not true.  One need only look at the Acts of Secession of Alabama (“And as it is the desire and purpose of the people of Alabama to meet the slaveholding States of the South, who may approve such purpose, in order to frame a provisional as well as permanent Government”) and Texas (“…[T]he power of the Federal Government is sought to be made a weapon with which to strike down the interests and property of the people of Texas, and her sister slave-holding States”).

Perhaps the clearest expression by a major figure is the “Cornerstone Speech” of CSA vice-president Alexander Stephens on March 21, 1861.  There could scarcely be a more clear-cut statement of the purpose of secession:

“The prevailing ideas entertained by [Jefferson] and most of the leading statesmen at the time of the formation of the old constitution, were that the enslavement of the African was in violation of the laws of nature; that it was wrong in principle, socially, morally, and politically….Our new government is founded upon exactly the opposite idea; its foundations are laid, its corner-stone rests, upon the great truth that the negro is not equal to the white man; that slavery subordination to the superior race is his natural and normal condition.”

There it is: the Civil War was about slavery.  Specifically, the chattel slavery of African-Americans, described by Chief Justice Taney in his majority opinion in Dred Scott v. Sandford (1857), where he holds that the U.S. government cannot forbid slavery anywhere in its territory because that would constitute depriving slaveholders of property without due process.  Taney explicitly stated that not only were black persons not citizens, but also that

“They had for more than a century before been regarded as beings of an inferior race, and altogether unfit to associate with the white races, either in social or political relations; and so far inferior that they had no rights which the white man was bound to respect, and that the negro might justly and lawfully be reduced to slavery for his benefit.”

They tell African-Americans that slavery times ended long ago, so they should be over it by now.  But aren’t the descendants – literal and figurative – of the white-supremacist “Old South” the ones who cannot let go of the past?  The modern mania for the Confederate battle flag began during the Civil Rights movement of the 1950s and 1960s.  It was first revived by the “Dixiecrats” who walked out of the Democratic National Convention over Civil Rights issues and nominated Strom Thurmond for president.  The flag became an integral part of the State flag of Georgia in 1956, and was ordered flown on the Statehouse of South Carolina in 1962.  It was a symbol of defiance against those who would eliminate segregation, lynching, and other forms of racial inequality and oppression.  If it was about “heritage,” that is the heritage it was intended to glorify.

Use whatever language and misty-eyed nostalgic sentiment you wish, the Confederate battle flag is a symbol of racial oppression.  The murder of the Rev. Clementa Pinckney in Charleston on June 17 has spurred a wave of revulsion and opposition to that flag, which was so proudly displayed by the white supremacist accused in the murders of Pinckney and eight others.  The governor of Alabama quietly ordered it taken down from the Statehouse grounds in Montgomery.  South Carolina’s governor has called for that flag’s removal from Statehouse grounds. [See the update above.]

It was the murder of Pinckney that changed my opinion from one of disgust to one of full-blown opposition to State endorsement of the Confederate battle flag.  Pinckney was not only pastor of Emanuel AME church, he was also a prominent State Senator.  And every day he went to work at the State Capitol building, he had to walk past that flag.  Every time he entered the halls of representative government, he had to walk under a symbol telling him that the State officially looked with longing and affection to a distant time.  That time was when South Carolina went to war against the United States of America (the first shots of the war were fired by the South in Charleston Harbor) in order to ensure that the ancestors of Senator Pinckney and all those like them could be held in bondage and treated as less than human beings.  Can you imagine a Jewish member of the German parliament being expected to walk past a Nazi flag on his way to the Bundestag?  The idea of excusing it by saying, “It’s part of our heritage.  It has nothing to do with antisemitism,” would be laughable.

If private individuals want to display the Confederate battle ensign (and thus their endorsement of what it represents), let them.  That’s why we have a First Amendment.  But it is absolutely unconscionable to in any way allow States or any other governments to display it on State property, and especially not on State flags, which are to be representative of the whole body of citizens.

2 thoughts on “THE CONFEDERATE FLAG(S) REVISITED”