Regular visitors to this blog will know about the work of Xiuhtezcatl Martinez, seventeen-year-old climate-change activist, speaker, and hip-hop artist.  We can now add the title of “author,” as his new book arrived on the market earlier this month.

We Rise: The Earth Guardians Guide to Building a Movement that Restores the Planet is a combination autobiography, environmental analysis, and how-to manual for activism in the battle for the future of the planet. This activism has been the focus of Martinez’s life since he was six years old. For the past eleven years he has been precociously active in the field, including being the subject of the short film Kid Warrior working as youth director of the environmental action organization Earth Guardians, and spreading the message of climate concern through music. He addressed the United Nations at the age of 15 and was a participant in the Paris Climate Conference at 16. Magazine profiles of his work have appeared in Time, Rolling Stone, and elsewhere, and he has been a guest of such television luminaries as Bill Maher (Real Time) and Trevor Noah (The Daily Show).

He has traveled to four continents speaking, performing, and organizing on behalf of his and future generations. Along with twenty other young people, he is a plaintiff in the case of Juliana, et al. v. United States, a lawsuit that charges the Federal government with failing to ensure a functioning environmental future for today’s and tomorrow’s young Americans. Upheld in District Courts, the suit has been certified for trial by the Ninth Circuit Court and is scheduled to be heard beginning February 5, 2018. A truly remarkable course for a life less than two decades old. 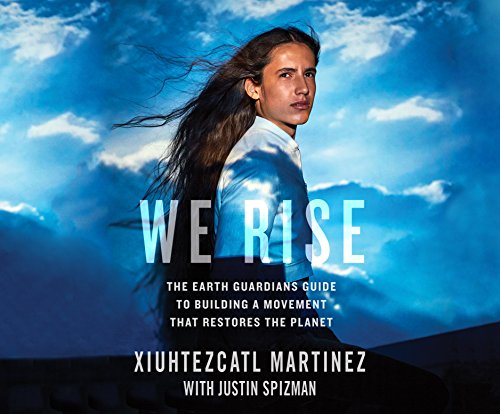 Martinez has divided We Rise into three main sections, all similarly organized. The first is a short history of his life and activism, beginning with his indigenous Aztec heritage and roots. Following is an analytical summary of threats to the Earth’s physical integrity, and finally a set of practical and spiritual plans for realizing ideas and actions at every level, from personal and local to national and global.

Every part of the book underscores its subtitle by outlining actions. Martinez interviews other activists, experts, and celebrities, eliciting the histories of their growth in awareness and the ways in which they are working for environmental stability and improvement today. Each chapter includes specific steps, small and large, in which the reader can put belief and commitment into practice.

I hope Baby-Boomers who remember the dedication and commitment of the 1960s, Gen-Xers concerned about the future their children will live in, and Millennials seeking to find their own cause and a reason to participate in worldwide action all will find motivation in this inspiring work by an inspiring young man. Let us strive to leave a legacy more of consideration than consumption, more of stewardship than exploitation, and more of integrity than irresponsibility.

[We Rise: The Earth Guardians Guide to Building a Movement that Restores the Planet (ISBN 978-1-63565-067-9) is published by Rodale Press.  Hardcover, 240 pp. It is available at booksellers everywhere and online.]