It’s an election year, they say. Of course, every year is an election year at some level in American government, but the majority of Americans care only about the quadrennial contest to choose a new President of the United States.

The three branches of government outlined in the Constitution were designed just like those in the United Kingdom. They consisted of a bicameral legislature with an elected lower house and an appointed upper house (for Senators were at first not popularly elected, but appointed by State legislatures), a single-person executive, and an independent judiciary.

The framers were not sure what they were creating. There had never been a modern office like “President” before; nearly all nations were hereditary monarchies. The idea of a hereditary monarch agglomerating wealth and power, going to war on a whim, and collecting taxes to fund his military adventures and lavish lifestyle was rejected by a more-or-less egalitarian America.

How would the President be chosen? No one – not even Thomas Jefferson – thought that Joe Everyman could be trusted with the power of the vote. Election of the President was left to the collective choice of the individual States.

The process is still inherently undemocratic. With electoral votes determined by the number of Congressional members a State has and each State having exactly two senators, small States have disproportionate influence in the selection process. Wyoming and the District of Columbia have one electoral vote for each 200,000 residents, while California has one per 700,000 residents.  In addition, the rural West has several sparsely-populated States which were admitted during the presidential administration of Benjamin Harrison (1889-1893).  Traditionally, States have entered the union in pairs, first one Northern/free and one Southern/slave and later one Republican and one Democratic.  The States admitted in 1889 and 1890, however, were all Republican-dominated and all but one have remained so, thus distorting the effect of the national popular vote.

Each of the major parties nominated its candidate first by the convention system and now by the primary system. The conventions set it so that a party usually selected a candidate acceptable to all of its factions, but also concentrated the power of selection in party leaders, not voters. 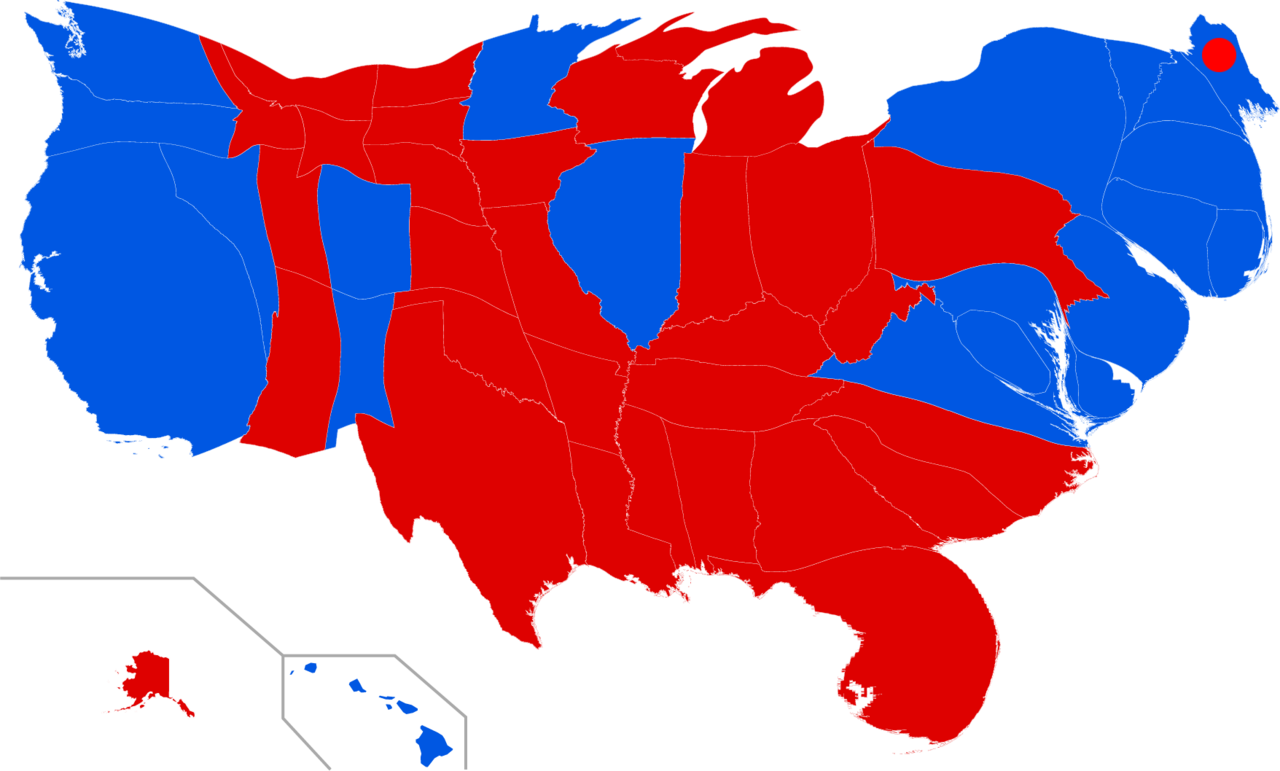 In the parliamentary governments of the rest of the English-speaking world, the party with the majority of seats in the legislature forms the government, bringing in both a party plan and the votes to implement it. That does not happen in the USA, where the President may be of a different party from the Congressional leadership.

The situation is made worse by the way in which each party selects its candidate nowadays. There is no party leader to assume the role; only when there is an incumbent finishing his/her first term is there a candidate without formidable opposition for a party’s nomination. Otherwise, the process can be accurately described as a circus. The primary-dominated system came about after the fiasco that was the Democratic Party convention of 1968. The nominee of 1972, George S. McGovern, and his supporters stressed primaries as the most honest and democratic means of selecting a candidate.

As primaries grew in importance, the selection process was warped by three things: voter apathy, ubiquitous mass media, and money. The most patriotic thing one can do in a democracy is vote, but over half of Americans don’t vote. A third of Americans never vote. In primaries, the level of participation is much lower than that. That leaves the decision-making for nominees up to the most active members of each party, dominated by the most hard-core and extreme.

Once each party has selected a candidate, access to voting is a key part of election strategy.  Democrats want to make voting easier, including same-day registration, enhanced absentee voting, and long early-voting periods, because that benefits Democrats.  Republicans want to make voting more difficult, particularly for those more likely to vote for Democrats. There are many examples (e.g., voter ID requirements, truly a solution in search of a problem), but Ohio has shown some creative innovations: any State-issued ID card is valid for voting, except for a student ID from a State university (students are perceived as more likely to vote Democratic), and if a voter shows up at the wrong voting location (even if it is just the wrong table in a room housing more than one precinct), the poll workers may not tell the voter the right location (urban – i.e., majority-Democrat – polling places are more often changed). In many States the number of polling places need not reflect the number of voters, so that urban and student areas sometimes see lines long enough to cause a ten-hour wait.

Print and electronic mass media – and, more recently, social media – are so fragmented and irresponsible that reasoned (even truthful) commentary is rare. Each faction has a niche of journalists and quasi-journalists feeding its consumers not information but affirmation of their existing beliefs.

Thus the idea of electing a “Condorcet candidate” (from the plan popularized by the Marquis de Condorcet [1743-1794] to find the candidate most acceptable to the most people) is made unlikely. The problem is exacerbated by the USA’s history of marginalizing small parties (particularly those outside the center-right “fragment”  that has traditionally dominated American political thought).

A President of the legislature’s minority party, or one without the full support of his own party’s legislators (Jimmy Carter, for example), means that the President and the Congress may be at impasse most of the time. This is not an effective path to effective government.

Yet the American way of selecting a President is to start floating possibilities as soon as the previous election is over, then to spend more than a year entertaining possible candidates in a system that rewards simple slogans, facile answers to hard questions, and a lack of substantial ideas. People of ideas do not make good candidates, because they are thoughtful and nuanced, two things that do not play well with voters for whom analytical thinking is anxiety-producing. The last two real candidates of ideas, Barry Goldwater in 1964 and George McGovern in 1972, were crushed in their elections by two outrageous political con-men, Lyndon Johnson and Richard Nixon.

Only in the USA can someone such as Donald Trump, with no political experience at all, but with an egocentric real-estate empire built on inherited money, and a “reality” television show that for over a decade portrayed him (wrongly) as the greatest businessman in America, be the leading candidate for the Presidential nomination of a party he has never served in.

The process begins with “debates,” which are not debates at all, but joint press conferences. Candidates come with prepared answers that they respond with, regardless of what questions are asked.   Then comes actual voting.

Iowa, for some reason, goes first, with caucuses in which people join in groups according to whom they support. Iowa is scarcely representative of the United States as a whole. Its religious society requires candidates to appear reverent and its agricultural economy requires everyone to support the foolish and counterproductive use of corn-derived ethanol in automotive fuel.

The first primary election is in New Hampshire, a State even less representative of the national makeup than Iowa. A string of other primaries follows, gradually becoming less important as the leading candidates are identified. It has been over 40 years since the nominee has truly been decided on the convention floor.

Once the nominees are identified, the long battle for electoral votes is undertaken. The winner-take-all practice of 49 of the 51 voting jurisdictions means that only “swing States” really matter in campaigns, as none of the electoral votes of the many States dominated by one party can be contested by the candidate of the other party. Each of the major parties has a plan that would change this, and of course, each plan favors the party proposing it.

Democrats would like to see the Electoral College abolished and the Presidential race determined by the total popular vote of all 50 States and the District of Columbia, because there are more Democrats. Republicans would like to see the electoral votes assigned one by one to the candidate with the most votes in each Congressional district, because there are more majority-Republican districts. This is a result of both  gerrymandering  (for example, in 2014 Republicans got less than half the votes cast for U.S. House members from Pennsylvania, but won 13 of the 18 seats), and the aforementioned disproportionate representation from conservative rural States in the West.