“Removal” is a word with ugly associations in American culture. In the Nineteenth Century it was a euphemism for “forced deprivation and relocation of native tribes,” and the way it was carried out is surely a black mark in the nation’s history.

The indigenous peoples who were thus “removed” were subjugated in colonial style. Colonialism follows imperialism. As an empire is built by the acquisition of territory, those native to the territory are not permitted to participate in the exploitation of that territory beyond the minimum contribution necessary. Their job is to cede resource-rich lands and to provide menial labor in dangerous occupations for poverty wages.

The classic example of modern colonial exploitation is Africa. During the Second Age of Imperialism, which took place in the 1800s, European powers took over almost all of Africa. The United Kingdom and France were the major players, but Germany, Belgium, and others got in on the action.

When the colonial powers took on African territory, their goal was not only national self-aggrandizement, but also the acquisition of natural resources from their colonies. The First Age of Imperialism in the 1500s had stripped gold and silver from the Americas and brought it back to Europe, and in the 1600s and 1700s it had created an agricultural system based on a similar model. In the same way, the Second Imperial Age stripped the vast natural resources of the continent of Africa – gold, diamonds, industrial metals, ivory, and agricultural products – and removed them and the wealth derived from them to the home countries of the colonial powers.

The economic and social exploitation of Africa was justified by the racist anthropology of the time. Scientists throughout the Nineteenth Century worked hard to create a justification for the European domination of Africa, and they found it in artificial racial constructs. Humankind was divided into arbitrarily created “races,” with a hierarchy that emphasized skin color. The lighter-skinned a human was, the higher his/her intelligence, ability, and morality were presumed to be.

It was presented as if the colonial powers were doing a favor to the indigenous peoples of Africa. They were assumed to be living in backward poverty because of their inferior nature, and thus some perverted form of noblesse oblige called the European powers to bring them enlightenment by subjugation. Africans’ inferiority – a presumed “low intelligence” and “low morals” – was the reason they themselves had not made the most of the natural gifts of their continent. Rudyard Kipling’s poem “The White Man’s Burden” describes imperialism as a noble undertaking – indeed, a service to humanity (sub-humanity?). This is the first of its seven stanzas:

Take up the White Man’s burden–
Send forth the best ye breed–
Go bind your sons to exile
To serve your captives’ need;
To wait in heavy harness,
On fluttered folk and wild–
Your new-caught, sullen peoples,
Half-devil and half-child.

“The White Man’s Burden” was originally written for the sixtieth anniversary of Queen Victoria’s rule, but it was ultimately rewritten and used for another purpose, and Kipling composed “Recessional” for the queen’s celebration.

“Recessional” foreshadows the end of empire, caused by the expense of over-extension. This proved out when it became unprofitable to try to control wide empires, especially after the low-hanging fruit of the natural resources had been quickly exploited and expropriated.

In the second half of the Twentieth Century, the colonial powers freed their colonies, much as slaveholders freed servants whose productive days were over – congratulating themselves on their benevolence while unburdening themselves of responsibility for those no longer worth the expense of their maintenance, while the newly-freed are left to shift for themselves in a world for which they are unprepared and unsuited.

The newly independent African nations foundered politically and economically, both from lack of experience in self-government and from inter-tribal conflict caused by the colonial powers’ creation of national boundaries that did not respect the needs or desires of differing ethnic populations. The blame for the unsuccessful transition to democracy, however, was quickly assigned to the Africans themselves. Their “inferior intelligence” and “low morals” were once again trotted out as the cause of their political instability as well as their poverty, poor health, and general misery.

There is a colonial experience within the United States that has been going on for centuries, and in recent decades it has also become associated with “removal,” although this time it is not the inhabitants of a region that are being removed – it is the geological structure of the region itself.

Mountaintop Removal mining is an extrapolation from strip mining, a process whereby overlying soil and rock are removed by enormous power shovels, exposing the coal beneath. In Mountaintop Removal, roughly the top one-third of a mountain – as much as 400 feet – is deforested and then blasted to bits by explosives, after which the resulting rubble is bulldozed into the adjacent valley or hollow (known by the cutesy Appalachian-pronounced term “holler fill”). Within the rubble is a toxic mixture of soil, rock, ancient trees, explosives residue, coal, and other debris that is dumped onto the valley ground, where it enters surface streams and infiltrates into groundwater. For more about the disastrous effects of Mountaintop Removal, click here  and here.

West Virginia is the State most affected by this practice, although it is also performed in coal country ranging from eastern Tennessee to southeastern Ohio. The second most affected State is Kentucky, which has many things in common with West Virginia. In addition to abundant coal resources, the two States share a place in American sociological folklore. They are both home to a large proportion of residents who are impoverished, under-educated, and in poor health. Mention of either of those two States elicits chuckles and comments about inbred illiterates making illegal whiskey. 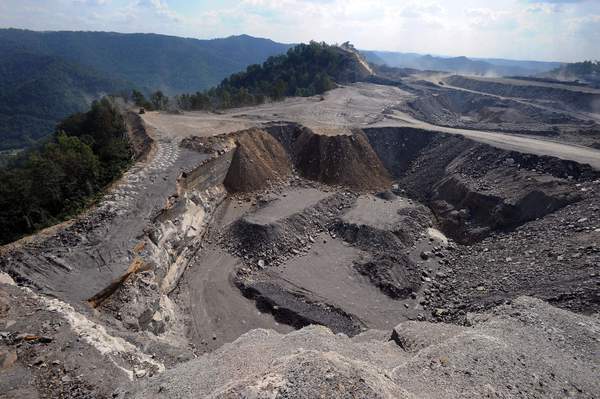 In an economic sense, West Virginia is an American colony; rich in natural resources that are stripped out by outside interests, leaving the territory impoverished and defiled. Adding insult to injury, the poverty and defilement are blamed on the “inferior intelligence” and “low morals” of the inhabitants. Most of the people who live in Appalachia have a built-in inferiority complex. It is not unusual to hear a person introduce herself by saying, “I’m [name]; I’m just a hillbilly.” I know this. I grew up in the coal country of Appalachian Ohio.

In an earlier post I pointed out how the United States practices political colonialism, in which territories such as Puerto Rico and American Samoa are denied participation in decisions about the government that rules them. Let it be known that American colonialism does not end there. Economic colonialism is practiced in West Virginia and neighboring States, with the inhabitants blamed for poverty caused by decisions made by outside colonizers with the same justifications and explanations for the destruction left behind.

2 thoughts on “COLONIALISM WITHIN AMERICA”